5 Best Badminton Rackets For Beginners In 2021

The badminton racket is arguably the most important piece of equipment a badminton player has to choose.

As a badminton player myself (since the age of 15) I know only too well that the wrong racket can break your game, while the right one can make it.

If you’ve never chosen a racket before, you might be having a tough time right now. I’ll keep this intro short and let you read on, so you can swing your new racket as soon as possible.

Here are my picks for the best badminton rackets for beginners:

Read more about each racket in the review section of this article.

How to choose the right badminton racket as a beginner

As a new player, you will probably want to choose a good all around racket. That being said, it’s useful to know just a few things to look for in your quest for the perfect badminton racket.

In my experience, the following makes for a good beginner’s racket:

You can read more about each point and why they matter in the following text, or jump directly to the juicy stuff, where I review my top five picks for beginner-friendly rackets.

In my experience, the best beginner rackets are fairly light. Go for a racket with a weight between 80 and 90 grams (3U or 4U).

A lighter racket will make it easier for you to move around on the court.

What a lighter racket means for your badminton game:

A badminton racket can have three types of balances: head-light, evenly-balanced or head-heavy.

Here’s why all of this matters…

A head-light racket makes it easier to maneuver the racket quickly and react to your opponents shots.

On the downside, you can’t generate as much power from the rear court with a head-light racket, as you can with a head-heavy one.

Some players prefer head-light rackets for doubles because of the game’s fast pace.

A head-heavy racket makes it easier to generate more power in your strokes from the back of the court.

The downside is that it’s more difficult to maneuver and requires more wrist strength. For those reasons, it’s not the best choice for beginners.

An evenly-balanced racket is the golden middleway for most beginners.

Flexibility in a badminton racket refers to how much the racket can bend. The categories of flexibility range from flexible to very stiff.

A stiff racket offers more control, while a flexible one offers more power. Think of a spring trying to go back to its natural position.

As a beginner, your technique won’t be very developed, which is why using a more flexible racket is preferred, as it will add some power to your shots.

Actually, a higher string tension will increase your accuracy but reduce the power of your shots at the beginner level.

As a beginner, go for a fairly low tension, if you have a choice when ordering your racket. If you don’t have a choice, don’t worry too much about this point.

As you improve, you will be able to have your racket re-strung to a tension that fits you and your game better.

Should you go expensive or cheap?

The truth is that as a beginner, you don’t have much of a reference. In other words: you don’t even know what you like yet!

Which badminton racket is the best is highly individual. So, don’t pay too much for your first racket.

An expensive racket could actually harm your game.

Expensive rackets are made mostly for advanced players and professionals.

For example, if you get a racket with too high string tension, you have to swing harder to generate power, which puts you at risk for injuries like tennis elbow.

Similarly, the sweet spot of the string bed might be smaller, making it difficult to hit the shuttle accurately.

The five rackets you’re about to read about are all fairly safe choices when you’re a beginner and also not too expensive.

Now lets jump in to the juicy part, where I review the 5 best badminton rackets for beginners. First, I highlight most of the pros and cons of the rackets and then jump into more details.

The Senston Professional Woven badminton racket is an excellent racket at a very reasonable price.

It is possible to go for a cheaper racket than this as a beginner, but if you plan to play for several years, this racket will serve you well as you advance to intermediate level.

With this racket, you’ll get the biggest bang for your buck.

Senston have come out with some quality rackets at a lower price-point, which is why you will find not one, but two Senston rackets on this list.

The Yonex Arcsaber Light 10i is a racket that I personally use for everyday play. Overall it’s a great racket that I have been using for almost a year now.

I love that it’s light, evenly balanced and flexible, because it makes it easy for me to reach every shuttle and return it with a good amount of power as well.

If I had to say something negative about it, it’s that it is quite light for me, an intermediate player who prefers playing singles.

When I play doubles, this racket is perfect as it’s light and easy to maneuver.

The racket will be slightly heavier when strung, and you will also be able to give it a bit more weight by adding a different grip to its handle.

Even though this racket is cheap, it does not lack quality. It has everything you need in a beginner’s badminton racket.

Want to make a racket on the court without spending a lot of money? Then the Senston N80 Graphite could be a good choice for you.

The Li-Ning U-Sonic 67 comes prestrung from the factory and with a 6-month guarantee from the manufacturer.

Overall, this is an awesome racket for both beginners and intermediate players.

In terms of its colors, it offers something different to most other rackets with its orange shaft and partly black and red racket head.

The Yonex Carbonex 8000 is a solid badminton racket that won’t set you back too much. If you want a Yonex without spending a lot of money, this could be the racket for you.

The racket is fairly light, is made of graphite and comes prestrung from the factory.

Thanks to its durability, this racket will stay with you for a long time.

If you ever want to upgrade to a racket more suited for intermediate players, the Carbonex 8000 will still make for a solid backup.

By choosing a solid racket from the beginning of your badminton journey, you will set yourself up for success.

As a beginner, it makes sense to go for a fairly light, evenly balanced and flexible racket.

And don’t forget; buying a quality badminton racket from the start doesn’t have to be more expensive than buying a sub-par one. 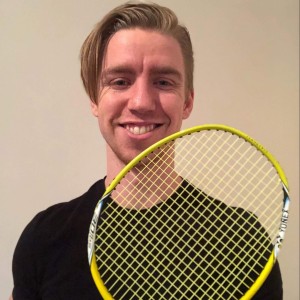 I am the owner and editor of Racquetwise. I have been enjoying badminton and other racket sports since I was 15, and through this blog I am passing on my knowledge to other racket fanatics like yourself!

As an Amazon Associate I earn from qualifying purchases.